Dattatreya Balkrushna Kalelkar (1 December 1885– 21 August1981), popularly known as Kaka Kalelkar, was an Indian independence activist, social reformer and journalist. He was a major follower of the philosophy and methods of Mahatma Gandhi. 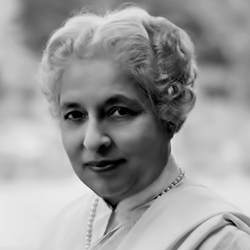 Vijaya Lakshmi Nehru Pandit (18 August 1900 – 1 December 1990) was an Indian diplomat and politician, the sister of Jawaharlal Nehru,[1] the aunt of Indira Gandhi and the grand-aunt of Rajiv Gandhi, each of whom served as Prime Minister of India.

Balasaheb Gangadhar Kher was the first chief minister (then called prime minister) of Bombay State which consisted of present day Maharastra and Gujarat States of India. He was awarded the Padma Vibhushan by the Government of India in 1954. A lawyer, solicitor and social worker by choice and politician by necessity, Kher was often described as “Sajjan”, good and gentle. Kher was a scholar, an accomplished orator, and a man with no pretensions.

Sarvepalli Radhakrishnan was an Indian philosopher and statesman who was the first Vice President of India (1952–1962) and the second President of India from 1962 to 1967. One of India's best and most influential twentieth-century scholars of comparative religion and philosophy.

Jawaharlal Nehru was the first Prime Minister of India and a central figure in Indian politics for much of the 20th century. He emerged as the paramount leader of the Indian independence movement under the tutelage of Mahatma Gandhi and ruled India from its establishment as an independent nation in 1947 until his death in office in 1964. Nehru is considered to be the architect of the modern Indian nation-state: a sovereign, socialist, secular, and democratic republic. Dr. Rajendra Prasad was the first President of the Republic of India. An Indian political leader, lawyer by training, Prasad joined the Indian National Congress during the Indian independence movement became a major leader from the region of Bihar.